For the first ten years of my path, I felt like a fraud. Not only didn’t I feel in control of my gifts, but life always seemed like a HUGE effing challenge. Between the bills, the kids, and the thousand small emergencies that life brings, I certainly didn’t feel like a powerful witch, much less a capable adult.

Being an intuitive empath didn’t help.

The education of the time (back when the internet was a baby) was h one ward won to begin with, but I have always been a bookish and mad scientist of consciousness sort. It’s not like I didn’t know how to cleanse my chakras or do cord cuttings. I knew, at least in theory, what it meant to center and ground.

Ha, at least I thought I did.

What I did figure out after life just about completely crashed down around me was that I was never going to deep enough. But I’m the only one who had trouble getting to the meditative point where it all made more sense.

So many witches have trouble meditating. Of course, there the common obstacles, like not being to clear your mind, not having tons of time to dedicate to a practice, and even not being able to sit still long enough to do what all the book and meditation teachers tell you to do. And most come to the belief that they just aren’t meditation kinds of people.

But meditation isn’t just about sitting around thinking pretty thoughts. There are so many other styles of meditation out there, beyond zen and mindfulness, which the spiritual community just doesn’t tell you about, and there is no one way to meditate no matter what any guru tells you.

Without realizing that though it’s easy to get stuck in this place where you aren’t going deep enough to work well with your gifts, where you feel disconnected from your workings, and life feels like a struggle because you aren’t connected to your innate magick and power. 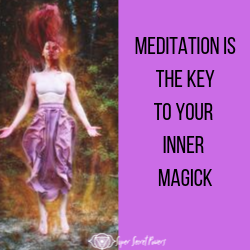 Almost every form of practical magick and healing technique begins with getting meditative. If you haven’t mastered your ability to go inward, then magick and life is going to feel like swimming through muddy waters for a gifted witch.

Whether you need to connect to your spirit guides, clear some chakras, do some cord cutting, or even coming to center in the mornings, all these tools and practices rests on you mastering your ability to negotiate and access your meditative states.

Even advanced practices, like Reiki, card reading, spell work, and ritual work work more smoothly and consistenty when you have mastered your uniques connection to your inner realms and altered states.

Are you ready to start your meditation practice?

Most people begin by simply picking the newest trend in meditation. But wouldn't be smarter to start where your stregnths are?
Learn more about your authentic mediation style

If you can’t change your state of mind-heart-soul about your situation, your potential for creating big magick in your life remains stuck in neutral. You have to believe that there might be a solution, a better way to do things, some kind of Divine message waiting to help and then you have to know how to clear your mind and energy in order to begin working toward your goals with the magick, healing, and inspired action steps you want to use.

When I say clearing your mind, I don’t mean in that perfectionist sense you hear other teachers talk about, where they seem like they are drifting in clouds of eatheral bliss. You know how to clear your mind. You do it often, whether it’s through taking a drive, doing the dishes, listening to some music, or going for a walk.

That is the biggest secret you need to know now in order to master meditation. You have your unique way in which you are already entering into meditative states, of clearing your mind, of resetting your energy. And I bet you use these activites on a regular basis and they don’t necessarily look like the fancy multi-step meditations you learn in books and classes.

These activities come natural to you because they give you something back. And maybe you haven’t realized exactly what they provide, but you do them because in some way they make you feel good, or at least better.

The trick is to become conscious of what and when you are doing those things that clear your mind and heart. These practices are already working for you, you have already built up some habits and knowledge about what happens. As you begin to recognize how you have already been meditating, and thinking about how to leverage that, you might even begin to see your unique and authentic style of meditation come forward which will help you go deeper and begin to feel like the Goddess of you Inner Magick and mojo!!

Tell me in the comments below, what are those activities that you rely on daily which seem to help you clear your head and heart?